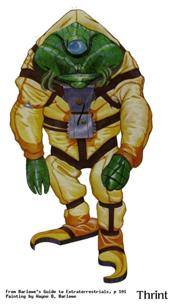 The Thrintun (singular Thrint), in Larry Niven's fictional Known Space universe, are a long-extinct species which ruled the galaxy through telepathic mind control. They are also called Slavers.

The Thrintun evolved on a planet where most animal species possessed telepathic ability. Natural selection led to an environment wherein no individual species possessed great advantage over any other; defenseless off-world species, however, were easy prey. A single Thrint can manage a few dozen sentient beings simultaneously; with an amplifier helmet, the same Thrint can control an entire planet.

The Thrintun were green-skinned, scaly carnivores, eating and excreting through a single facial orifice lined with sharp teeth and fringed with pink feeding tendrils. They had a single eye in large, round heads. Their two hands had three large, clumsy fingers arranged in a mutually opposed fashion, like a mechanical grab. Size could have big variations.

Thrintun had no internal mechanism for regulating appetite; for their own health and safety they had to learn while young to endure their constant, ravenous hunger rather than suffering from sickness due to overeating. The average adult male IQ was between 80-90, while females were nearly mindless. Males came of age when they could effectively resist the telepathic control of their father.

Thrintun referred to their telepathy as "The Power". In all their religions, The Power was self-evident of their manifest destiny to rule the galaxy. A loss or congenital lack of The Power is cause for exile, or more usually murder by the family, in their society. These unfortunates, called Ptavvs, are tattooed pink and are enslaved by other Thrintun.

Their success in spite of low intelligence and poor skill with tools was due to the great advantage of their telepathic abilities; they never suffered much selective pressure to improve what they had. A Thrint's slaves could be far more intelligent than their master, but intelligence provided no protection at all against enslavement.

Their society, though immense at its peak, was not very complex, consisting mainly of various families vying with each other for slaves and land. The only real laws were an indictment against murdering other Thrintun and two "unbreakable oaths": the prtuuvl for agreements between Thrintun, and the kpitlithtulm for agreements between a Thrint and favoured slaves. Violation of any of the abovecitation needed meant death by vivisection – enough to give even the most violently desperate second thoughts about doing so.

The Thrintun developed a mediocre philosophic tradition in response to their need for control over their aggressive drives. Aphorisms such as "haste is not speed" represent deep wisdom to a Thrint. The combination of strong and insatiable hunger with low intelligence also leads Thrintun to act rashly.

The Thrintun were Neolithic hunters when their planet was visited by a starship piloted by an unknown race. They quickly enslaved its crew, then their civilization before going on to galactic domination over dozens of species (known to later humans as the Slaver Empire?). Chief among these suborned races were the masters of genetic engineering, the Tnuctipun.

The Thrintun settled vast areas of the galaxy, seeding many planets with basic, Tnuctipun-created life forms for use as food sources. (The diversity of life before their empire is not known.) Once a planet was seeded with a sort of yeast, larger animals known as whitefoods (later, as the Bandersnatchi) were introduced in a form of interstellar cattle-farming. The common chemical composition, genetics and environmental conditions found among species in Known Space are a consequence of this process: most life in the Galaxy is descended from Tnuctipun food yeast.

Pak Protectors, progenitors of the human race, probably evolved on one such planet after plant life had started and that the Thrintun self-destructed before the Bandersnatchi were installed.

The Thrintun were nearly defeated about two billion years before the human era. The Tnuctipun had devoted centuries to a well-crafted plan to destroy the Thrintun: designing technologies to weaken Thrintun society and cultivating an easily shattered dependence upon the Tnuctipun. As the latter pressed the final battle of the war, the Thrintun, as a death blow they called Suicide Night, used an immensely powerful telepathy amplifier to send a single, telepathic command throughout the Galaxy: "Die." All chordates in the galaxy committed suicide, including the Thrintun themselves.

The Grogs, a race of sessile furry cones which can control animals telepathically, are suspected of being degenerate descendants of the Thrintun.

Sources and references: World of Ptavvs, A Relic of the Empire, The Handicapped, The Soft Weapon, There Is a Tide, Ringworld, Peter Robinson, Children's Hour, Teacher's Pet, Barlowe's Guide to Extraterrestrials.