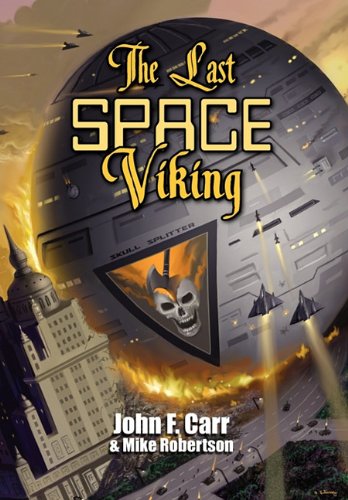 The Last Space Viking by John F. Carr and Mike Robertson? is set in the Terro-Human Universe. It takes place a hundred years after Lucas Trask founded the League of Civilized Worlds. Many changes have occurred in the Old Federation and King Trask's plans for a new galaxy order are brought to a sudden halt when a new power emerges from the ashes of the Old Federation. Will King Rodrik the First of Tanith be able to salvage his grandfather's dream, or become a tool of the new Mardukan Empire?

Space Vikings have been raiding and terrorizing the worlds of the Old Federation for hundreds of years. Great fortunes have been made and hundreds of planets conquered and despoiled. Unfortunately, the Sword-Worlds have gone into their own decline just as the League of Civilized Worlds is faced with its greatest defeat. Soon, the first real threat to Space Viking domination must be overcome and brought to heel. Will the disparate Space Vikings join together, or be sent packing back to the Sword-Worlds in defeat?

Captain David Morland of Joyeuse? might well be the last of the great Space Viking captains. He emerges at a time when the Old Federation is changing, and not for the better. All Morland wants is his own Space Viking base world to use as a place for organizing raids and trading parties into the thousands of worlds of the long-dead Federation. Generations of Space Viking marauders have taken their toll and plunder-worthy planets have declined as more and more of the Old Federation worlds have slipped into barbarism. But first, Morland has to find the right world and conquer it before he's discovered by a new power determined to end the Space Viking menace, one way or another!

Space Viking's Throne (2012), written by Mike Robertson and John F. Carr, is a direct sequel to Last Space Viking. The story continues the story of the aftermath of the conquest of the League of Civilized Worlds at the hands of the Mardukan Empire. Captain David Morland tries to establish a new viking base, while trying elude Imperial hunters.