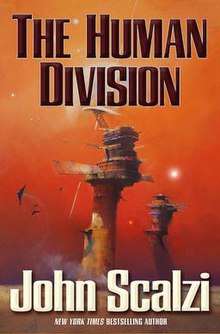 The Human Division is the fifth full-length book by John Scalzi set in the Old Man's War universe.

The book was published at e-book retailers between 15 January-9 April 2013 as digital serials with thirteen episodes.

The episode titles with the release dates in 2013 are as follows:

The B-Team (15 January)
Walk the Plank (22 January)
We Only Need the Heads (29 January)
A Voice in the Wilderness (5 February)
Tales From the Clarke (12 February)
The Back Channel (19 February)
The Dog King (26 February)
The Sound of Rebellion (5 March)
The Observers (12 March)
This Must Be the Place (19 March)
A Problem of Proportion (26 March)
The Gentle Art of Cracking Heads (2 April)
Earth Below, Sky Above (9 April)

On May 14, 2013, the serial was collected into a full-length novel of the Old Man's War universe, plus it included the first tale of Lieutenant Harry Wilson, "After the Coup", and a short story that was not part of the serialization, "Hafte Sorvalh Eats a Churro and Speaks to the Youth of Today". This short story was released at Tor.com, where "After The Coup" can be found as well.