The Girl Who Heard Dragons 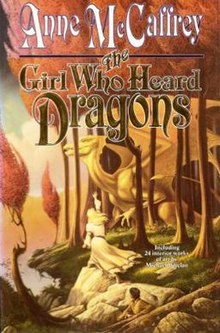 The Girl Who Heard Dragons is a 1994 collection of short fantasy and science fiction by Anne McCaffrey. It opens with an essay on her celebrity, or lack thereof, and includes 23 drawings by the cover artist Michael Whelan?.

The title novella and cover story alone belongs to the Dragonriders of Pern series?. It had previously been published as a fine book by Cheap Street and would later be included in the all-Pern collection A Gift of Dragons. Twelve of the fifteen stories were previously published in various magazines or anthologies; two were original to the collection.