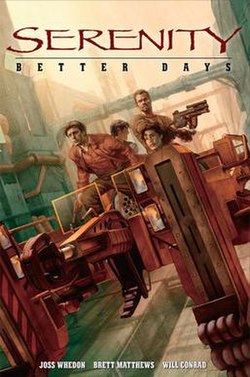 The second three-issue miniseries, Serenity: Better Days, was announced by Dirk Wood of Dark Horse Comics during WonderCon 2006. The three issues were released in March, April, and May 2008. Joss Whedon?, Brett Matthews?, Will Conrad?, and Michael Heisler? returned, but colourist Laura Martin? was replaced by Michelle Madsen?. Unlike the previous series, Adam Hughes illustrated the three covers, each of which depicts three of the nine cast members, and together form a triptych. The trade paperback cover was drawn by Jo Chen.

The mini-series is set between the Firefly TV-series and the film Serenity. However, Better Days is set before the events of Those Left Behind, in order to have all the characters aboard the ship, and to better capture the "heart and status quo — in as much as there even is one — of the television series". The comic sees the crew of Serenity pulling off a successful job, which results in unexpected wealth and the related complications.

The three issues were collected as a trade paperback in October 2008. This work won Diamond's 2008 Gem Award for "Licensed Trade Paperback of the Year". A second collection was released on August 31, 2011. Titled Better Days and Other Stories, the hardcover volume includes the one-shot comic Float Out and the short stories The Other Half and Downtime in addition to the three issues of Better Days.

In 2009 Better Days was one of six nominees for the inaugural Hugo Award for Best Graphic Story. The miniseries came second to Girl Genius, Volume 8: Agatha Heterodyne and the Chapel of Bones.

Issue #1 opens with an unnamed man demonstrating a new automated security drone. It cuts to Mal, Zoe, and Jayne robbing an art gallery, with Simon advising on the value of the works. While trying to escape in a delivery van, the four attract the attention of the security drone, which chases them; when the van is destroyed, the thieves are shown to be using their hovercraft 'Mule'. Mal and company lead the drone into a trap, where it is disabled by Kaylee: the drone is the Serenity crew's actual target. Meanwhile, Inara is with a client: Ephraim, an Alliance special operations agent tasked with hunting down Independent terrorists known as 'Dust Devils'. Mal delivers the drone to his client, and in exchange for the vital component, the man tells them of a stash of money hidden in a temple by a gang whose members killed each other before they could collect it. The crew retrieve the cash without incident, but on checking it, realise there is significantly more than they expected.

The second issue shows the fantasies of several of the characters as to what they would do with unlimited wealth, while they take a vacation on a luxury world. Inara, after arranging to meet a client, asks Mal about the Dust Devils, while Ephraim briefs his team to take down Mal. The drone operator tortures Mal's client to find Serenity‍ '​s location. Mal and his crew foil a robbery at the resort, after which Mal and Zoe note the landing of an Alliance special ops ship, with Mal theorising that the ship belongs to Ephraim, and that he is after the Dust Devils. On going to investigate Inara's shuttle, Mal sees Simon leave, before he is knocked unconscious.

Issue #3 begins with Mal tied to a chair and being beaten up by Ephraim, while Zoe confronts Inara about Mal's disappearance. Zoe then reveals that she, not Mal, was a Dust Devil, and offers herself in exchange for the captain. The rest of the crew plan to use the exchange to rescue Mal, but they are interrupted by the Drone Operator, who attacks both groups from his ship. Robots deployed by the ship are dealt with by the Serenity crew and Ephraim's assistants, while Mal and Ephraim team up to successfully destroy the ship. The two groups go their separate ways, but upon returning to Serenity, the crew find that they have been robbed. Inara suspects that Mal organised the robbery so the crew would remain together—unlike the others' fantasies on how they would like to live, Mal is already leading his preferred life.