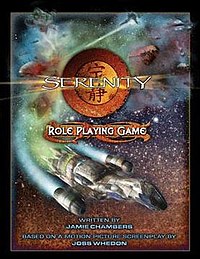 Serenity Role Playing Game is a science fiction role-playing game released in 2005 and set in the universe of the movie Serenity. It was produced by Margaret Weis Productions

, and its mechanics were the first iteration of the Cortex System. It won an Origins Award for best RPG in 2005 and Margaret Weis' license came to an end on January 31, 2011.

The themes of Serenity RPG are similar to those presented in the original movie as well as its precursor, the show Firefly. The primary focus of the game is on constantly moving to the horizon and avoiding being tied down. Secondary themes are created through character interaction and there is plenty of leeway to allow for a Game Master to create their own themes within the setting.

Out in the Black? by Laura Hickman? and Tracy Hickman?, the system's first adventure, 2006