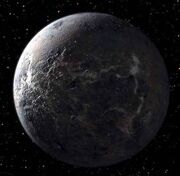 Salusa Secundus is the third planet of the Gamma Waiping system and the homeworld of the Imperial House Corrino; also noted as the second stopping point in the migrations of the Zensunni Wanderers.

Salusa Secundus was remembered in Fremen? tradition as being a temporary home for the Wandering Zensunni; a planet on which nine generations of the Fremen ancestors lived as slaves. However, the veracity of such a belief remains debatable.

A region was once inhabited by Buddislamics before they were freed from generations of slavery and went off to settle on Unallied Planets. Muadru pottery had also been found in its ruins, which became archeological site north of the later built city of Zimia.

During the last years of the Old Empire, a man named Bovko Manresa settled on then isolated Salusa Secundus and his mansion had become a meeting hall for refugee humans. During the Time of Titans, the League of Nobles supposedly was formed out of these meetings. Salusa Secundus was thenceforth its capital, until and during the Butlerian Jihad.

The planet had successfully repelled two assaults of the Thinking Machines. The first assault occurred shortly before the Butlerian Jihad. Tercero Xavier Harkonnen assumed command of the defenses of the planet and it's capital. The attack was led by Agamemnon and other Titans. Their objective was the Scrambler web generator towers in the city. If the Titans could destroy the towers, it would allow the orbiting Thinking Machine fleet to attack the planet directly. Fortunately, Tercero Harkonnen anticipated the Cymek objective and thwarted the attack.

Salusa had become a central world for distributing refugees and repopulating planets and strengthening racial lines using seed stock gathered by the Sorceresses of Rossak years ago.

Atomic catastrophe destroyed the ecology of Salusa Secundus. It is thought that the devastation of the planet came about by an attack by House Tantor against House Corrino.

The Royal Court was moved to Kaitain, and Salusa then became designated the Imperial Prison Planet. It is also the secret training ground for the Emperor's elite Sardaukar troops,and one of two planets on which shigawire is grown (the other being III Delta Kaising).

In 10193 AG, Paul Atreides wrested the Imperial Throne from House Corrino. Before taking the throne, Paul promised Shaddam IV that he would keep a throne on Salusa Secundus, and that the planet would be transformed into a pleasant and beautiful world. This move was outwardly to show that he maintained respect for Shaddam, but in truth the move was to rob the deposed Emperor of the training grounds for his Sardaukar.

Shaddam IV then went into retirement, ruling over Salusa Secundus with the majority of his Household in accompaniment. From his deposed home, Shaddam witnessed the birth of his grandchild, Farad'n Corrino; sired by Dalak Fenring, whose mother was Wensicia Corrino. It was also from the planet that Shaddam continually tried to encourage Count Hasimir Fenring to re-join him, so that together they could wrest the Imperium back to House Corrino.

After the aborted attempt on Paul's life on Arrakis, by Hasimir's daughter, Marie Fenring, who was killed by Alia Atreides; and the subsequent second attempt on his life by the Count himself; Hasimir and his wife, Margot Fenring, were exiled permanently to Salusa Secundus.