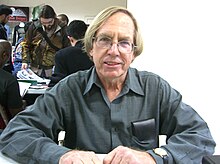 Roy William Thomas, Jr. (born November 22, 1940) is an American comic book writer and editor, who was Stan Lee's first successor as editor-in-chief of Marvel Comics. He is possibly best known for introducing the pulp magazine hero Conan the Barbarian to American comics, with a series that added to the storyline of Robert E. Howard's character and helped launch a sword and sorcery trend in comics. Thomas is also known for his championing of Golden Age comic-book heroes – particularly the 1940s superhero team the Justice Society of America – and for lengthy writing stints on Marvel's X-Men and Avengers, and DC Comics' All-Star Squadron, among other titles.

Thomas was born in Jackson, Missouri, United States. As a child, he was a devoted comic book fan, and in grade school he wrote and drew his own comics for distribution to friends and family. The first of these was All-Giant Comics, which he recalls as having featured such characters as Elephant Giant. He graduated from Southeast Missouri State University in 1961 with a BS in Education, having majored in history and social science.

Thomas became an early and active member of Silver Age comic book fandom when it organized in the early 1960s – primarily around Jerry Bails, whose enthusiasm for the rebirth of superhero comics during that period led Bails to found the fanzine Alter Ego, an early focal point of fandom. Thomas, then a high school English teacher, took over as editor in 1964 when Bails moved on to other pursuits. Letters from him appeared regularly in the letters pages of both DC and Marvel Comics, including The Flash #116 (Nov. 1960), Fantastic Four #5 (July 1962), Fantastic Four #15 (June 1963), and Fantastic Four #22 (Jan. 1964).

In 1965, Thomas moved to New York City to take a job at DC Comics as assistant to Mort Weisinger, then the editor of the Superman titles. Thomas said he had just accepted a fellowship to study foreign relations at George Washington University when he received a letter from Weisinger. He worked for worked at DC for eight days in late June and very early July of 1965 before accepting a job at Marvel Comics.

In 1981, after several years of freelancing for Marvel and a dispute with then editor-in-chief Jim Shooter, Thomas signed a three-year exclusivity writing/editing contract with DC Comics.

Thomas and Gerry Conway collaborated on the screenplays for two movies: the animated feature Fire and Ice (1983) and Conan the Destroyer (1984).

During the following decade, Thomas began working less for Marvel and DC than for independent companies. He wrote issues of the TV-series tie-ins Xena: Warrior Princess and Hercules: The Legendary Journeys for Topps Comics. Additionally, he began writing more for other media, including television, and relaunched Alter Ego as a formal magazine published by TwoMorrows Publishing in 1999. In 2005, he earned a master's degree in Humanities from California State University.

Space: Above and Beyond