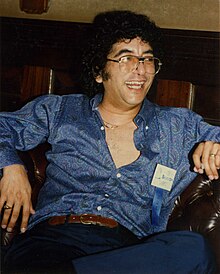 Robert Lynn Asprin (1946 – 2008) was an American science fiction and fantasy author and active fan, best known for his humorous MythAdventures and Phule's Company series. He was born in St. Johns, Michigan, and attended the University of Michigan at Ann Arbor, Michigan from 1964 through 1965. From 1965 through 1966 he served in the United States Army. He was married (twice) and had two children. He was active in science fiction fandom and in the early years of the Society for Creative Anachronism under the name "Yang the Nauseating", and co-founded the Great Dark Horde in 1971. He was also the founder and an influential member of the Dorsai Irregulars.In 1976, he was nominated for the Hugo Award for Best Dramatic Presentation for The Capture, a cartoon slide show written by Asprin and drawn by Phil Foglio.

Asprin's first novel, The Cold Cash War, an expansion of an earlier short story of the same title, was published in 1977.

Over the next few years, he created and edited (with his then-wife, Lynn Abbey) the Thieves' World series of shared world anthologies, credited as the first project of its type. Soon after the series hit its stride, many of the authors produced novels and stories outside the anthologies, beginning with Beyond Sanctuary by Janet Morris, the first "authorized" Thieves World novel, published in 1985. Janet Morris and Chris Morris went on to produce two more authorized Thieves' World "Beyond" novels and a series of related novels about their immortalized character, Tempus, and the Sacred Band of Stepsons.A series of graphic novels followed in the mid-1980s, and several other authors, including Andrew J. Offutt and David Drake, published novels about their characters. In 2002, Lynn Abbey resurrected the series with the novel Sanctuary.

In 1978, Asprin began the "MythAdventures" series, chronicling the comic adventures of Skeeve and Aahz, with the book Another Fine Myth. Originally illustrated by Frank Kelly Freas, and later by Phil Foglio, the highly pun-driven books follow a "demon" magician who has lost his powers and his inexperienced human apprentice as they travel through a variety of worlds in pursuit of finding their place in life, though under the guise of seeking wealth and glory. Some of the early "Myth" novels were later adapted as comic books by Foglio and others. The Myth books have passed through three publishing companies over the years: Donning Starblaze, Meisha Merlin and, as of 2008, Wildside Press.

In the 1990s, Asprin's "Phule" novels followed the humorous science-fiction exploits of a rag-tag company of the "Space Legion" and its wealthy and iconoclastic leader, Willard Phule.

Due to a series of personal and financial problems, Asprin stopped writing in the 1990s. He had two books on The New York Times Best Seller list which piqued the interest of fans and the IRS. Unfortunately this came right at the time of an almost seven-year writing drought. He eventually negotiated an agreement with the IRS, that encouraged him to return to writing, and, in the late 1990s and early 2000s, he wrote several novels in collaboration with authors Peter Heck, Jody Lynn Nye, and Linda Evans. These novels included continuations of the "Myth" series and the "Phule" series as well as works in new series.

One of Asprin's last projects was NO Quarter, originally co-authored with Eric Del Carlo, and later edited by Teresa Patterson. It is a dark fantasy/suspense/ murder mystery novel set in the author's beloved New Orleans French Quarter. Although the novel's fantasy elements (voodoo and black magic, tarot readings and precognition, ghosts and mysticism) are secondary to the brutal murder that is the focus of the plot, it is set in the same milieu as Asprin's Griffen McCandles novels (Dragons series), Dragons Luck and Dragons Wild. The two protagonists of NO Quarter, Maestro and Bone, also appear as minor characters in the Dragons novels. Maestro, the mysterious pool shark and fencing master in NO Quarter, is a highly fictionalized but recognizable self-portrait of the author. NO Quarter was published November 2009 by DarkStar Books.

Asprin died of a myocardial infarction at home in his bed on May 22, 2008.