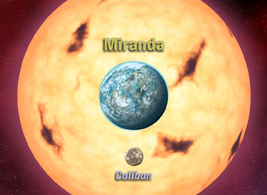 A planet with one moon, Caliban, around the Burnham protostar in the Firefly-Serenity Universe. Terraformed in 2433.

Miranda was an experimental colony where the Alliance tried to chemically modify its populace to be peaceful. This worked perfectly; it eliminated violence, but in the process it had a fatal side effect. The inhabitants lost all ambition ;they stopped doing any work, stopped talking to each other, stopped reproducing and eventually stopped even feeding. For 0.1% of the population it had the opposite effect and caused extremely violent behavior, beyond mere psychosis but animalism. The "survivors" of Miranda were the Reavers? who started to menace the Rim planets.

As a result of the experiment Miranda was abandoned in 2506 and it was decided thata terraforming the planet was a failure. Removed from all maps of the Verse. Terraforming of Caliban initiated in 2519 but not yet completed. Because of the Reavers, Caliban is heavily militarised.

, a character in the play The Tempest by English writer William Shakespeare