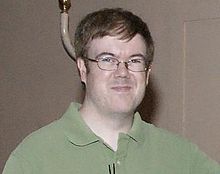 Michael (Mike) Mearls is a writer and designer of fantasy role-playing games (RPGs) and related fiction.

Mearls wrote the adventure To Stand on Hallowed Ground/Swords Against Deception (2001) for Fiery Dragon Productions and the last product from Hogshead Publishing, a Warhammer adventure titled Fear the Worst (2002) that Hogshead released for free on the internet. He also designed the game Iron Heroes (2005) for Malhavoc Press.

In June 2005, Mearls was hired as a designer by Wizards of the Coast. He came to Wizards through the community of third-party d20 designers. At Wizards, he served as a lead developer for Dungeons & Dragons R&D working on the new 4th Edition. Between the "Orcus I" and "Orcus II" design phases for fourth edition, Mearls spliced the encounter-power mechanics of fourth edition into Tome of Battle: The Book of Nine Swords (2006), which was in process during development of the new edition.

Along with Andy Collins?, David Noonan?, and Jesse Decker, Mearls was part of Rob Heinsoo's "Flywheel" design team for the fourth edition of Dungeons & Dragons, and did the final concept work from May 2006 to September 2006, before the first books for the edition were written and playtested. After Heinsoo was laid off in 2009, Mearls stepped up to become the new D&D Lead Designer. He co-designed the Castle Ravenloft Board Game (2010) with Bill Slavicsek?.