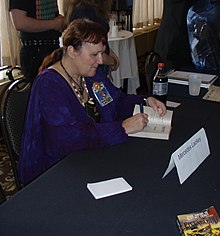 Mercedes Ritchie Lackey (born June 24, 1950) is an American writer of fantasy novels. Many of her novels and trilogies are interlinked and set in the world of Velgarth, mostly in and around the country of Valdemar. Her Valdemar novels form a complex tapestry of interaction between human and non-human protagonists with many different cultures and social mores.

Her other main world is one much like our own, but it includes clandestine populations of elves, mages, vampires, and other mythical beings. The Bedlam's Bard books describe a young man with the power to work magic through music; the SERRAted Edge books are about racecar driving elves; and the Diana Tregarde thrillers center on a Wiccan who combats evil.

Lackey has published over 140 books and writes novels at a rate of 5.5 per year on average. She has been called one of the "most prolific science fiction and fantasy writers of all time.

Lackey was born in Chicago, an event that prevented her father from being called to serve in the Korean War.

She places her meeting with science fiction at age 10 or 11, when she happened to pick up her father's copy of James H. Schmitz's Agent of Vega. She then read Andre Norton's Beast Master and Lord of Thunder and continued to read all of Norton's works—Lackey noted with chagrined amusement the difficulties of obtaining enough interesting books from the public library to sate her passion for reading. She wrote for herself but without real direction or purpose until she attended Purdue University. Lackey graduated from Purdue in 1972.

While at Purdue, she took a one-on-one class of English Literature Independent Studies with a professor who was a fellow science fiction fan. He helped her analyze books she enjoyed and then use that knowledge. Lackey then encountered fan fiction, which further encouraged her writing. She began publishing work in science fiction fanzines and then discovered filk and had some filk lyrics published by Off Centaur Publications.

She submitted a story to Sword and Sorceress, then sold the rewritten story to Fantasy Book Magazine. Her first sale was to Friends of Darkover.

She met C.J. Cherryh through filk, who mentored her during the writing of her 'Arrows' series. During this time, Marion Zimmer Bradley included her short stories in an anthology; and Cherryh helped Lackey through 17 rewrites of 'Arrows'. During this time, she claims to have been writing so much that she had no social life at all. She divorced Tony Lackey, and eventually married Larry Dixon.

Lackey lives with her husband Larry Dixon outside of Tulsa, Oklahoma.

She and Dixon have in the past worked in raptor rehabilitation. She often refers to her various parrots as her "feathered children". The afterwords to some of her books refer to rehabilitation and falconry, and it is clear that this interest has influenced and informed her writing. She also enjoys beadwork, costuming, and needlework. She claims, however, to be a "wretched housekeeper, and by and large an indifferent cook" (Valdemar Companion, p 64) Besides this, she does radar-reading during tornado season. She helps support the Alex Foundation.

Lackey is active in the ball-jointed doll community. She owns several dolls, many of which she has customized in the likenesses of her characters.

Historically, Lackey was active in the filking community. She was a major contributor to an early album of space filk, Minus Ten and Counting. She has won five Pegasus Awards, mostly for her songwriting. She was also active in the Society for Creative Anachronism, and belongs to the Great Dark Horde.

She is participating in the The Stellar Guild series published by Phoenix Pick. The series pairs bestselling authors like Lackey with lesser known authors in science fiction and fantasy to help provide additional visibility to them.

Lackey revealed herself to be a player of the massively multiplayer online role-playing game game City of Heroes along with her husband and father-in-law.She revealed her identity on a player-owned forum to join the efforts to save the servers from closing down.

, The World of Mercedes Lackey