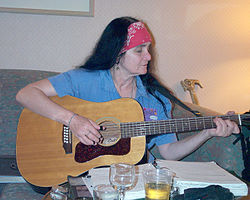 Along with The DeHorn Crew, in 1976 she created the first commercial filk recording, Folk Songs for Folk Who Ain't Even Been Yet. Her second recording, Solar Sailors (1977) included the song "Banned from Argo", a comic song parodying Star Trek which has since spawned over 80 variants and parodies. These two albums (originally on vinyl) have recently been put back into print on joint CD, entitled Folk Songs for Solar Sailors. Her song "Hope Eyrie" is regarded by some as being as close to the anthem of science fiction fandom as is possible in such a disparate group.

Fish often weaves Pagan and anarchist themes into her music. She has also set to music many poems by Rudyard Kipling. She is a popular guest at science fiction conventions, and she can often be seen at the large filksings with her distinctive 12-string guitar, "Monster", which Leslie says plays best when it is given good Scotch whisky.

She sings (and makes several appearances) in the film Finding the Future: A Science Fiction Conversation, which makes extensive use of her music. She was interviewed and performed in Trekkies 2.

Fish has been involved with numerous political causes, most notably anti-war activism during the Vietnam War, and is a longtime member of the Industrial Workers of the World, a fact referred to in several of her songs (e.g., "Wobblies From Space", "Leslie's Filks"). She is also well known as a gun-rights activist, and has asserted that private gun ownership is the only true protection of individual freedom (a topic touched on in several of her songs). Because of her distrust of the stability of modern society, she has in the past worked to organize groups for carrying on civilization after what she (at one time at least) considered the imminent collapse of the current society. Her album Firestorm was in large part meant as a set of instructions for surviving a nuclear war, on the reasoning that it would be easier to recall them if they were in lyric form.

On anarchism, Fish says: "What sort of anarchist future would I like to see? There's no reason for a government-free society to be nothing but agrarian, no reason at all that it couldn't be industrial and space-faring."

The character "Jenny Trout" in the science fiction novel Fallen Angels is clearly meant to be Fish, although Trout is portrayed as a Marxist.

In addition to her work as a filk artist, Fish is also well-known within the Star Trek fan community for her works of fan fiction, which include "Shelter" (1976), one of the first Kirk/Spock stories ever published, and the fan-published Star Trek novel The Weight. "In Textual Poachers, his landmark study of fan communities, MIT's Henry Jenkins described Fish's anarchist-feminist Star Trek novel The Weight as a 'compelling narrative' that's 'remarkable in the scope and complexity of its conception, the precision of its execution, and the explicitness of its political orientation.'" She has also written original novels and short stories, both alone and in collaboration with C. J. Cherryh and others. Her song, "Carmen Miranda's Ghost is Haunting Space Station Three,"

inspired a collection of short stories with the same title

, edited by Don Sakers? and featuring stories by Anne McCaffrey and C.J. Cherryh.

She is an avid roleplaying gamer, especially in regard to LARPing. She has also been a member in the Society for Creative Anachronism since the 1970s. In recent years, she has been the driving force behind in the establishment of Fan Haven, a 230-acre (0.93 km2) private park in Arizona meant to serve as a safe space for LARPers, Pagans, naturists, SCAdians, and other marginalized groups associated with fandom. However, the Federal government has disputed the validity of the mining claim that she proposed to use to establish ownership.

While Fish rarely discusses her private life, she had been in a romantic relationship with anarchist political activist Mary Frohman "from the late '60s through the early '80s." Together they were part of the "Dehorn Crew", the house band for the IWW. Leslie has often asserted that bisexuality is the human norm, and that the pervasive sexual repression she sees in current society causes many of the current social ills. She briefly worked as a dominatrix in San Francisco during the 1980s, and has since been (at times) a defender of the rights of sex workers. She was recently married to long-time friend, Robert "Rasty Bob" Ralston.

Writing as F. Sigmund Mead, "A Summary of the Physiological Roots of Andorian? Culture" (Journal of Xenoanthropology, June 2341), edited by Leslie Fish. Fictional article on Andorian culture first published in Sehlat's Roar #2, a Star Trek fanzine of the 1970s, published by Randy Ash.