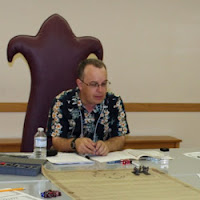 James Maliszewski is a RPG game designer and author. He started roleplaying in the late Fall of 1979, when he opened up a copy of the Dungeons & Dragons Basic Set edited by Dr. J. Eric Holmes originally purchased for his father. More than 30 years later, he's still playing. Ran Grognardia Games

Has written a lot for the d20-system and for settings like Dungeoon & Dragons as well as Fading Suns?, Stargate? and Star Wars?. Today possibly a designer for the Thousand Suns RPG, Dwimmermount and other games.

He disapperaed from the Internet and the game world in 2012 and has surfaced only sporadically since then. This caused a controversy due to Kickstarter funding

James Maliszewski did a Kickstarter for Dwimmermount: An Old School Fantasy RPG Megadungeon that funded with $48,756 in April 2012. Kinda. The kickstarter was actually fronted by Autarch. Maliszewski had a great reputation in the RPG world with many credits to his name as well as writing the well-known Grognardia blog.

When the project was funded, Autarch sent all of the money to Maliszewski.

The PDF was due June 2012 (just two months after the KS), and the hardback was slated for August 2012 delivery. As those dates came and went, it became clear that Maliszewski wasn't nearly as far along with the design as thought. Backers started to get upset. Autarch was in a bad position.

Towards the end of 2012, Maliszewski disappeared. In mid-January 2013, an intermediary reported that Maliszewski's father was dying.

There was no further contact until the end of March 2013. Autarch was desperately trying to contact him the entire time. It was their name on the Kickstarter, and they were trying to see what they could do - both for Maliszewski and for the backers.

Like I said, tricky... This one dealt with issues such as grief and mental health as well as commitments on the business side.

Eventually in late March 2013, Maliszewski contacted Autarch and agreed to return the Kickstarter funds and gave the IP and his notes to Autarch. Autarch has assembled a team and is working on finishing the project.

Maliszewski then dropped out of sight again. Grognardia remains frozen on December 11, 2012.

Autarch delivered on the products after lengthy delays. Maliszewski published one item in late 2013 (Thousand Suns: Five Stars) under his Grognardia Games imprint.