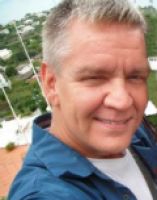 Greg Benage worked for Biohazard Games, publishers of Blue Planet (1997). Fantasy Flight Games arranged to publish a new edition of Jeff Barber's and Benage's Blue Planet, and as part of the arrangement FFG wanted one of the Biohazard team to come over to Fantasy Flight. Benage agreed and FFG spent 2000 pushing out an entirely new line of Blue Planet products.

Since the original mechanics of the game had never been very polished, Benage decided to rewrite them entirely, which resulted in a brand new "Synergy" system. Benage assisted lead designer Rob Vaughn on FFG's Fireborn. He was the designer of the Dragonstar RPG as well as a writer and designer for Stargate SG-1 RPG?.

Greg Benage lives with his wife, Maria, in Atlanta, Georgia. When he's not creating stories, Benage creates spreadsheets and PowerPoint presentations as a product manager for one of the largest commercial banks in the U.S.