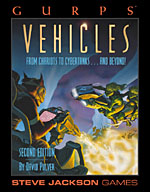 GURPS Vehicles is a sourcebook for GURPS. The first edition was published in 1993. The book explains how to build and operate an array of conveyances, from sailboats to starships to witches' brooms. Step-by-step instructions show how to select the structural frame, propulsion system, and thrust factor for vehicles such as a nuclear-powered tilt-rotor mini-copter.

The book includes a very mathematical vehicle construction system as part of its complex and intricate mechanics.

On the net: SJ Games