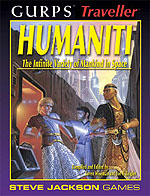 In the far future, mankind has scattered to many worlds and divided into many races . . . and some are very alien, despite their Human ancestry. GURPS Traveller: Humaniti describes 16 Human-descended races from the far reaches of the Imperium and beyond, including the technologically advanced Darrians? (with their sun-smashing Star Trigger), the carnivorous Dynchia?, the dour warrior Azhanti?, and the aggressive Itharans?.


* Never before published details on the societies and cultures of 16 races of Humaniti.
* Maps of the Answerin?, Darrians, Irhadre?, Kargol?, Luriani?, Nexxies?, and Otrai? homeworlds.
* Background histories and character creation details for all 16 races