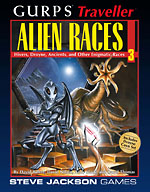 Openly cooperative, apparently pacifistic, reportedly cowardly, the starfish-shaped Hivers? don't seem to be empire-building material – but they hold one in a secure grip. They won the only interstellar war they've fought after losing every battle, but with this most alien of the major races, looks almost always decieve. Inscrutable, patient, and subtle, the Hivers puzzle their neighbors more than they worry them. It should be the other way around.


An insectoid race scattered across the Imperium like so many gypsies, the seemingly insignificant Droyne? often fall beneath the notice of Humaniti . . . and most Humans are foolish enough to think it's their own choice. A series of puzzles in their history and culture suggests that huge secrets lurk behind the compound eyes of these tiny sentients . . . and that the most awesome of the major races may come in the smallest package.

* The Inheritors?, a race of fluorine-breathers living on the shell of an ancient Dyson sphere and "improving" on the technology left behind;
* The Lithkind?, a nocturnal species for which mating means death and death means rebirth, and who treat the opposite sex as taboo!