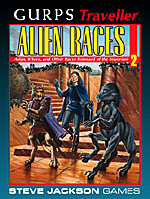 The warrior Aslan? revere honor and glory; their traders and mercenaries are found throughout the Spinward Marches and the Solomani Sphere. Their wanderlust and combative nature make them well-suited to adventuring, while their habit of blatantly grabbing land when no one is looking makes them good recurring foes in a campaign.


The militant vegetarian K'kree? are driven by their faith to rid the universe of all meat-eaters. Players may join this effort, fight against it, or simply try to make a living amidst the crusade. The K'kree are constantly clashing with the Vargr, and keep and uneasy peace along their borders with the Hivers and the various human client states in the region.

The biology, homeworlds, culture, and society of the fierce Aslan and the centauroid K'kree are examined in detail.

* The Inyx?, a race of aquatic parasites who absorb bio-electrical energy from their whale-sized hosts;
* The Devi Intelligence?, comprising two forms: The Intellects, sentient fungi who resemble colonies of giant toadstools, and their predatory spores, the Shiverbats.