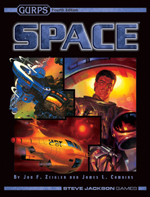 GURPS Space is a genre toolkit for creating Science Fiction campaigns using the GURPS role-playing game. It performs a similar purpose as GURPS Fantasy does for Fantasy games. Rules and guidelines are provided for running games from science fantasy and space opera to hard science, creating worlds and planets and notes about aliens races. The first edition was published in 1988.


With this book, you can create anything from a single alien beast to a whole galaxy of civilizations and star systems . . . quickly and randomly, or with a detailed, step-by-step process that's true to biology and astrophysics as we understand them today. The softcover reprint contains the same material, with black-and-white interiors and a lower price.

GURPS Space was one of the broad genre books that followed the publication of the GURPS Basic Set. This first tier genre book was supported by several second-tier sourcebooks including the GURPS Space Atlases (1988-1991), GURPS Space Bestiary? (1990) and GURPS Aliens (1990), which helped fill out the GURPS Space world.

The Third Edition of GURPS Space had several differences from the earlier editions of the book. The biggest difference was the inclusion of a small subset of the GURPS Vehicles rules and some high-tech weaponry. Unlike the above-mentioned GURPS Fantasy's Third Edition analog, it was also a genre toolkit. Designed by Steve Jackson, William A. Barton and David Pulver and edited by Sean Punch?.

Coverage of spacecraft is aimed at setting level issues such as choosing the technology used by spacecraft in the game. This section does not worry about game mechanics issues, but rather helps players and gamemasters determine the broad capabilities of the vessel in question.

In a controversial move, the 4th edition book breaks with the format of earlier editions and does not contain rules for spaceship design or high tech guns. Those topics is covered by the books GURPS Vehicles (4e) and GURPS Ultra-Tech (4e) respectively. The rationale for this decision was explained in a series of official statements made on the sjgames forums by Managing Editor Chris Aylott and Line Editor Sean Punch.