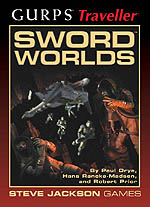 The Sword Worlds stand at the border of the Third Imperium, a small but proud civilization descended from ancient Terran migrants. Their inhabitants have spent centuries fighting for independence – from the Imperium, from the other great empires, even from each other.


A decade ago, the Sword Worlds went to war against the Third Imperium. They lost. Today, the Sword Worlders are in search of a new destiny, in a universe where their fierce pride seems headed for an inevitable fall.