GURPS Traveller Behind The Claw 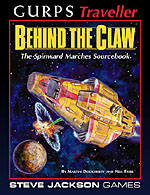 Behind The Claw: Slang phrase referring to those regions of the Third Imperium lying beyond the Great Rift. Almost a year from the Capital by Xboat, the Spinward Marches is a frontier region, scene of five Frontier Wars and innumerable skirmishes. The Marches are one of the most troubled regions of the entire Imperium.

Behind The Claw details the Spinward Marches, a complete sector of space. Over four hundred star systems are described in detail, along with essays on the Imperial Nobility and system of government, a detailed history of the region, referee's information, current events and a wealth of adventure material. The setting is rich and diverse, with unlimited scope for adventuring.

The Spinward Marches was first sector to be covered in the original Traveller background, and it is where the vast majority of campaigns are set. In many ways, it is Traveller's "home."