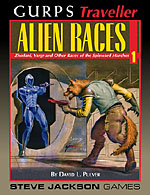 In contrast to the Imperium, the human-descended Zhodani? have long embraced psi powers. Within their vast interstellar empire, crime is almost unknown, workers are uniformly happy in their jobs, and mental illness is as easy to cure as a paper cut, thanks to advanced powers of the mind . . . and periodic visits from the Thought Police.


The Vargr? are a race of aliens descended from transplanted Terran canines. Removed from Earth hundreds of millennia ago, the Vargr have continued to develop on worlds millions of miles away from their planet of origin, and now control hundreds of worlds, under almost as many separate governments.

Both are formidable rivals to the Third Imperium.

Presented here for the first time are three significant "minor Races" from Zhodani and Vargr territory: the tyrannosaurian Drakarans?, the arachnoid Clotho? and the newly discovered, enigmatic Sheol?. Almost unknown in Imperial territory, these races are growing powers in the Zhodani Consulate and the Vargr Extents.