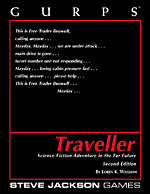 Marc Miller's Traveller is one of the most fully realized game backgrounds ever created . . . a vast empire of over 11,000 systems, with a turbulent history dating back thousands of years. Locales can range from a crowded spaceport to a lonely frontier outpost, from the teeming cities of the Core to the unexplored worlds on the edge of the Great Rift. Characters can be merchant princes, diplomats, soldiers, politicians, nobles, criminals . . . or all of them at once. Political intrigues, trading schemes, mind-wrenching alien enigmas, mercenary raids, wars . . . almost anything is possible.