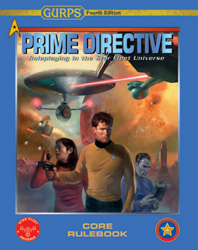 The GURPS Prime Directive Core Rulebook is designed as a stand-alone rulebook based on the GURPS Lite rules, but expanded by additional material from other core GURPS rulebooks.


While the initial Prime Directive roleplaying game restricted characters to being members of a Prime Team (sort of command-scientist-diplomats), GPD gets rid of all such restrictions! Players can create characters that are bridge officers aboard a starship, members of a mercenary combat team, officers and crew aboard a merchant ship, agents working for the Galactic Intelligence Agency, Star Fleet Marines, a non-governmental relief agency, investigative journalists, or any other type of character that you want to play.

Other key items in the GPD Core Rulebook include:

* Detailed Racial Templates for races within the Federation?, Klingon Empire?, Romulans?, Gorns?, and others. Templates for Star Fleet Academy graduates (and several other academies as well), plus professional templates detailing the requirements for different jobs (for example, helmsman on a Federation starship).
* Information and background specific to the Star Fleet Universe?; detailed explanations on such things as rank and promotion criteria and security clearances; detailed explanations of equipment like tricorders, transporters, and tractors without resorting to technobabble!
* Maps showing the area of the galaxy centered on Federation Space, including the boundaries of the other major empires, the location of major and minor worlds, neutral zones, and other key points.
* A complete, highly detailed timeline, allowing GMs to set their campaigns in the early years before the Federation was formed, during the General War period, later when the Advanced Technology ships were entering service, or at any other point in history that the GM prefers – GPD is not tied to any single period within the Timeline, and you can even ignore the entire timeline if you want to.
* Complete rules are included to conduct your space battles with the Star Fleet Battles?