The Generic Universal RolePlaying System, or GURPS, is a tabletop role-playing game system designed to allow for play in any imaginary setting. It was created by Steve Jackson Games and first published in 1986 at a time when most such systems were story or genre specific.

Players control their in-game characters verbally and the success of their actions are determined by the skill of their character, the difficulty of the action, and the rolling of dice. Characters earn points during play which are used to gain greater abilities. Gaming sessions are story-told and run by so-called Game Masters. 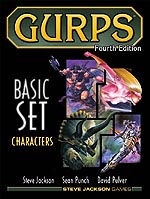 Role-playing games of the 1970s and 1980s, such as Dungeons & Dragons, used random numbers generated by dice rolls to assign statistics to player characters. GURPS

, in contrast, assigned players a specified number of points with which to build their characters. Together with the HERO System, GURPS was one of the first role-playing games in which characters were created by spending points to get attributes, skills, and advantages (such as the ability to cast magic spells). Additional points can be obtained by accepting lower-than-average attributes, disadvantages, and other limitations. This approach remains popular in role-playing games, in part due to the success of GURPS.


GURPS' emphasis on its "generic" aspect has proven to be a successful marketing tactic, as many game series have source engines which can be retrofitted to many styles. GURPS' approach to versatility includes using real world measurements wherever possible ("reality-checking" is an important part of any GURPS book). This allows players to fairly trivially convert things from the real world, other games or their imagination to GURPS statistics.

GURPS also benefits from the many dozens of worldbooks describing settings or additional rules in all genres including science fiction, fantasy, and historical. Many popular game designers began their professional careers as GURPS writers, including C.J. Carella, Robin Laws, S. John Ross, and Fudge creator Steffan O'Sullivan. It is sometimes stated that a large contingent of people who do not play GURPS purchase GURPS supplements because of the talented and creative writers. GURPS worldbooks set in historical periods can often be used as reference books as they usually include a bibliography suggesting additional sources.

The immediate mechanical antecedent of GURPS was The Fantasy Trip (TFT), an early role-playing game written by Steve Jackson for the company Metagaming Concepts. Several of the core concepts of GURPS first appeared in TFT, including the inclusion of Strength, Dexterity and Intelligence as the core abilities scores of each character.

In 1990 GURPS intersected part of the hacker subculture when the company's Austin, Texas, offices were raided by the Secret Service. The target was the author of GURPS Cyberpunk in relation to E911 Emergency Response system documents stolen from Bell South. The incident was a direct contributor to the founding of the Electronic Frontier Foundation. A common misconception holds that this raid was part of Operation Sundevil and carried out by the FBI. Operation Sundevil was in action at the same time, but it was completely separate. See Steve Jackson Games, Inc. v. United States Secret Service.

A free PDF version of the GURPS rules was released as GURPS Lite. This limited ruleset was also included with various books such as GURPS Discworld and Transhuman Space.

released GURPS Fourth Edition at the first day of Gen Con on August 19, 2004. It promised to simplify and streamline most areas of play and character creation. The changes include modification of the attribute point adjustments, an edited and rationalized skill list, clarification of the difference between ability from experience and from inborn talent, more detailed language rules, and revised technology levels. Designed by Sean Punch, the Fourth Edition was sold as two full-color hardcover books.

Part of an article in Wikipedia