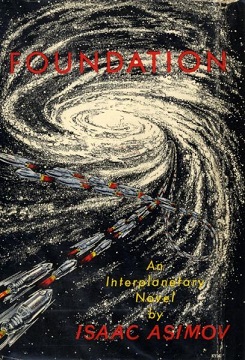 The premise of the series is that the mathematician Hari Seldon spent his life developing a branch of mathematics known as psychohistory, a concept of mathematical sociology. Using the laws of mass action, it can predict the future, but only on a large scale. Seldon foresees the imminent fall of the Galactic Empire, which encompasses the entire Milky Way, and a dark age lasting 30,000 years before a second great empire arises. Seldon also foresees an alternative where the interregnum will last only one thousand years. To ensure the more favorable outcome, Seldon creates a foundation of talented artisans and engineers at the extreme end of the galaxy, to preserve and expand on humanity's collective knowledge, and thus become the foundation for a new galactic empire.

between May 1942 and January 1950. According to Asimov, the premise was based on ideas set forth in Edward Gibbon's History of the Decline and Fall of the Roman Empire

, and was invented spontaneously on his way to meet with editor John W. Campbell, with whom he developed the concepts of the collapse of the Galactic Empire, the civilization-preserving Foundations, and psychohistory. Asimov wrote these early stories in his West Philadelphia apartment when he worked at the Philadelphia Naval Yard.

The first four stories were collected, along with a new story taking place before the others, in a single volume published by Gnome Press in 1951 as Foundation. The remainder of the stories were published in pairs by Gnome as Foundation and Empire (1952) and Second Foundation (1953), resulting in the "Foundation Trilogy", as the series was known for decades.

In 1981, Asimov was persuaded by his publishers to write a fourth book, which became Foundation's Edge (1982).

Four years later, Asimov followed up with yet another sequel, Foundation and Earth (1986), which was followed by the prequels Prelude to Foundation (1988) and Forward the Foundation (1993). During the two-year lapse between writing the sequels and prequels, Asimov had tied in his Foundation series with his various other series, creating a single unified universe. The basic link is mentioned in Foundation's Edge: an obscure tradition about a first wave of space settlements with robots and then a second without.

The plot of the series focuses on the growth and reach of the Foundation, against a backdrop of the "decline and fall of the Galactic Empire". The themes of Asimov's stories were also influenced by the political tendency in SF fandom, associated with the Futurians, known as Michelism.

The focus of the books is the trends through which a civilization might progress, specifically seeking to analyze their progress, using history as a precedent. Although many science fiction novels such as Nineteen Eighty-Four or Fahrenheit 451 do this, their focus is upon how current trends in society might come to fruition, and act as a moral allegory on the modern world. The Foundation series, on the other hand, looks at the trends in a wider scope, dealing with societal evolution and adaptation rather than the human and cultural qualities at one point in time.

Furthermore, the concept of psychohistory, which gives the events in the story a sense of rational fatalism, leaves little room for moralization. Hari Seldon himself hopes that his Plan will "reduce 30,000 years of Dark Ages and barbarism to a single millennium," a goal of exceptional moral gravity. Yet events within it are often treated as inevitable and necessary, rather than deviations from the greater good. For example, the Foundation slides gradually into oligarchy and dictatorship prior to the appearance of the galactic conqueror, known as the Mule, who was able to succeed through the random chance of an empathic/telepathic mutation. But, for the most part, the book treats the purpose of Seldon's plan as unquestionable, and that slide as being necessary in it, rather than mulling over whether the slide is, on the whole, positive or negative.

The books also wrestle with the idea of individualism. Hari Seldon's plan is often treated as an inevitable mechanism of society, a vast mindless mob mentality of quadrillions of humans across the galaxy. Many in the series struggle against it, only to fail. However, the plan itself is reliant upon the cunning of individuals such as Salvor Hardin and Hober Mallow to make wise decisions that capitalize on the trends. The Mule, a single individual with remarkable mental powers, topples the Foundation and nearly destroys the Seldon plan with his special, unforeseen abilities. To repair the damage the Mule inflicts, the Second Foundation deploys a plan which turns upon individual reactions. Psychohistory is based on group trends and cannot predict with sufficient accuracy the effects of extraordinary, unforeseeable individuals, and as originally presented, the Second Foundation's purpose was to counter this flaw. Later novels would, however, identify the Plan's uncertainties that remained at Seldon's death as the primary reason for the existence of the Second Foundation, which (unlike the First) had retained the capacity to research and further develop psychohistory.

Asimov unsuccessfully tried to end the series with Second Foundation. However, because of the predicted thousand years until the rise of the next Empire (of which only a few hundred had elapsed), the series lacked a sense of closure. For decades, fans pressured him to write a sequel.

In 1982, Asimov gave in after a 30-year hiatus, and wrote what was at the time a fourth volume: Foundation's Edge. This was followed shortly thereafter by Foundation and Earth. The story of this volume (which takes place some 500 years after Seldon) ties up all the loose ends, but opens a brand new line of thought in the last dozen pages. According to his widow Janet Asimov (in her biography of Isaac, It's Been a Good Life), he had no idea how to continue after Foundation and Earth, so he started writing the prequels.

The series is set in the same universe as Asimov's first published novel, Pebble in the Sky?, although Foundation takes place about 10,000 years later. Pebble in the Sky became the basis for the Empire series. Then, at some unknown date (prior to writing Foundation's Edge) Asimov decided to merge the Foundation/Empire series with his Robot series. Thus, all three series are set in the same universe, giving them a combined length of 15 novels, and a total of about 1,500,000 words. The merge also created a time-span of the series of around 20,000 years.

Early on during Asimov's original world-building of the Foundation universe, he established within the first published stories a chronology placing the tales about 50,000 years into the future from the time they were written (circa 1940). This precept was maintained in the pages of his first novel Pebble in the Sky, wherein Imperial archaeologist Bel Arvardan refers to ancient human strata discovered in the Sirius sector dating back "some 50,000 years". However, when Asimov decided decades later to retroactively integrate the universe of his Foundation and Galactic Empire novels with that of his Robot stories, a number of changes and minor discrepancies surfaced—the character R. Daneel Olivaw was established as having existed for some 20,000 years, with the original Robot novels featuring the character occurring not more than a couple of millennia after the early-21st century Susan Calvin short stories. Also, in Foundation's Edge, mankind was referred to as having possessed interstellar space travel for only 22,000 years, a far cry from the 50 millennia of earlier works.

In the spring of 1955, Asimov published an early timeline in the pages of Thrilling Wonder Stories

magazine based upon his thought processes concerning the Foundation universe's history at that point in his life, which vastly differs from its modern-era counterpart. Many included stories would later be either jettisoned from the later chronology or temporally relocated by the author. Also, the aforementioned lengthier scope of time was changed. For example, in the original 1950s timeline, humanity does not discover the hyperspatial drive until around 5000 AD, whereas in the reincorporated Robot universe chronology, the first interstellar jump occurs in 2029 AD, during the events of I, Robot?.

Impact on other Space Opera

Science fiction parodies, such as Douglas Adams?' The Hitchhiker's Guide to the Galaxy? and Harry Harrison's? Bill, the Galactic Hero, often display clear Foundation influences. For instance, "The Guide" of the former is spoof of the Encyclopedia Galactica, and the series actually mentions the encyclopedia by name, remarking that it is rather "dry", and consequently sells fewer copies than the guide; the latter also features the ultra-urbanized Imperial planet Helior, often parodying the logistics such a planet-city would require, but that Asimov's novel downplays when describing Trantor?