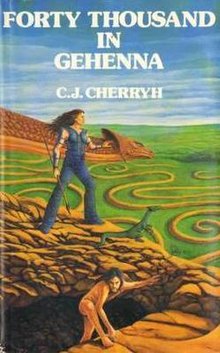 Forty Thousand in Gehenna, alternately 40,000 in Gehenna, is a 1983 novel by science fiction and fantasy author C. J. Cherryh. The science fiction novel is set in her Alliance-Union universe between 2354 and 2658, and is one of the few works in that universe to portray the Union side (the other notable exceptions being Cyteen and Regenesis).

42,363 Union humans and Azi are dispatched to set up a base on a very rare habitable planet named Gehenna II?. Unknown to the settlers, their mission is designed to fail; they are deliberately abandoned in order to create long-term problems for the rival Alliance.

The native Caliban are first presented as annoying lizard-like creatures. The humans at first attempt to keep them outside a perimeter or to drive them away. In time, larger and larger Caliban are seen, with differences in color, size, and even a social structure (some Caliban are subservient to the larger, different-colored Caliban). It becomes clear that the creatures are capable of communication, at least at the level of symbology, and of developing empathic or possibly telepathic links to humans. Eventually a symbiosis develops, with some of the Caliban pairing off with humans.