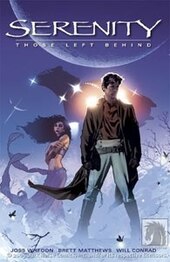 Several comic book stories have been released under the Serenity title, set in the fictional universe created for Joss Whedon's Firefly television series and Serenity film, and which are considered canon. As of 2014, eight Serenity stories have been published. Written by Joss Whedon? and Brett Matthews?, and illustrated by Will Conrad?, the first miniseries, Those Left Behind, was created as a bridge between the events of the series and film. Those Left Behind was popular: the first issue was the highest-selling comic published by Dark Horse Comics since the release of Buffy Season 8 in 2007, while the trade paperback is still one of the highest ranking items by sale quantity from that company. In early 2008, a second miniseries was released. Titled Better Days, it was set before Those Left Behind, with the storyline based around a heist that went in the characters' favor. In addition to the miniseries, a one-shot comic written by Jim Krueger and titled The Other Half was released in the August 2008 issue of Dark Horse Presents.

Later installments focused on the backstories of the characters. The first to be announced was The Shepherd's Tale in late 2007, focusing on the pre-Firefly history of the Shepherd Book character. Originally to be released in late 2008 as a three-issue miniseries, this date was not met, and there was no news until March 2010, when the comic was reannounced for a November 2010 release as a hardcover graphic novel. Accompanying the reannouncement of The Shepherd's Tale was news of a one-shot comic focusing on Hoban "Wash" Washburne. The comic, titled Float Out, was released in June 2010. In November 2010, the USA Today website published the "slice-of-life" short story Downtime as part of the Dark Horse: High Definition program. For Free Comic Book Day 2012, the story Firefly Class 03-K64 - It's Never Easy was paired with a Star Wars comic in a double-sided book.

Reaction to the comics has been mixed: while widely accepted by fans of the cancelled television series and film, several reviews have commented that the comics are inaccessible to those without this prerequisite knowledge, are a poor substitute for the filmed works, and often try to cram in too much information to the detriment of the story. Better Days was nominated for the Hugo Award for Best Graphic Story in 2009, and came second in its category.