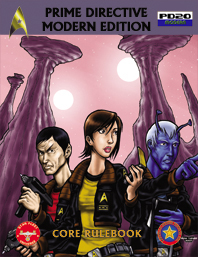 Prime Directive PD20M is based on d20 Modern rules, which work better for Science Fiction than the dungeon-based V3.5 rules. This game allows characters to be anything, from the Star Fleet crew to the Marines, from Orion Pirates to archaeologists, from a bunch of reserve officers looking to recapture the adventures of their long-lost youth, to a squadron of fighter pilots whose parties are as wild as their dogfights. Or you could be a Prime Team, Star Fleet's elite problem-solving teams that combine the skills of scientists, diplomats, and commandoes. The d20 Modern version of the core rules is designed for use with the WOTC d20 Modern Roleplaying Core Rulebook, which most d20M players already have.