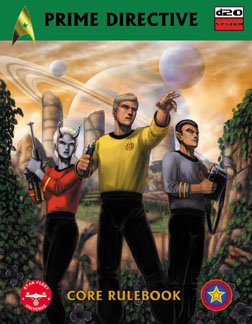 Prime Directive allows characters to be anything, from the bridge crew to the Marines, from diplomats to archaeologists, from a bunch of reserve officers looking to recapture the adventures of their long-lost youth, to a squadron of fighter pilots whose parties are as wild as their dogfights. Or you could be a Prime Team, Star Fleet's elite problem-solving teams that combine the skills of scientists, diplomats, and commandoes. The d20 version of the core rules is designed for use with the Player's Handbook, which most d20 players already have.