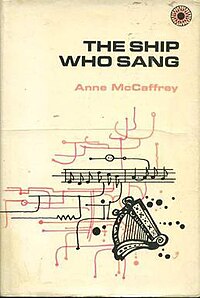 The Brain & Brawn Ship series is set in the future of our universe and in McCaffrey's Federated Sentient Planets. The parents of babies with severe physical disabilities — but fully developed and exceptionally talented brains — may allow them to become "shell people" rather than be euthanised. Taking that option, physical growth is stunted, the body is encapsulated in a titanium life-support shell with capacity for computer connections, and the person is raised for "one of a number of curious professions. As such, their offspring would suffer no pain, live a comfortable existence in a metal shell for several centuries, performing unusual service for Central Worlds."

After medication and surgery, general education, and special training, shell children come of age with heavy debts which they must work off in order to become free agents. They are employed as the "brains" of spacecraft ("brainships"), hospitals, industrial plants, mining planets, and so on, even cities – in the books, primarily spaceships and cities.

A brainship is able to operate independently but is usually employed in partnership with one "normal" person called a "brawn" who travels inside the ship much as a pilot would. A brawn is specially trained to be a companion and helper, the mobile half of such a partnership. The nickname is relative: the training is long and intense and the brawns must be brainy people in fact. Commonly the brain and brawn are paired at will and, for a fee, a brainship may terminate an assigned partnership.

McCaffrey explained the origin of the brainship premise to SFFworld in a 2004 interview. "I remember reading a story about a woman searching for her son's brain, it had been used for an autopilot on an ore ship and she wanted to find it and give it surcease. And I thought what if severely disabled people were given a chance to become starships? So that's how The Ship Who Sang was born.