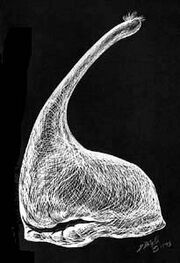 At one time found on every Thrint estate throughout the Thrintun empire, the only known survivors in Known Space are on the planet Jinx, though they are later found on the Ringworld and on a forested planet called Beanstalk (in the Man-Kzin Wars story "Hey Diddle Diddle"). The Bandersnatchi were the only intelligent species which were immune to the Thrint mental power.

A herd animal. Bandersnatchi are completely white, and resemble a very large slug with smooth, slick skin. From the front, a brontosaur-like neck, with no head, extends about as high as the bandersnatch's body. The tip is thick and rounded, entirely featureless, other than two tufts of black bristles (sense organs). The large mouth at the bottom, above the belly foot, is almost invisible when closed. The large mouth is adapted to scooping the Bandersnatchi's food, a form of mutated yeast, out of the shallow ocean-like colonies that the yeast live in.

Bandersnatchi are one giant cell. They have a single, long, thick chromosome. Their nerves are similar in structures to that of a human but, have no cell body, no nuclei, nothing to separate them from other specialized protoplasm. The Bandersnatchi have 6 large hearts, each weighing about 11 pounds. They asexually reproduce by budding. The brain is large, shaped long and narrow, and is encased in a bone shell. The skull is one end of the jointless, flexible, very strong cage of bone. This keeps them from ever shifting position.

Sources: World of Ptavvs, "A Relic of the Empire", "The Handicapped", Ringworld, Hey Diddle Diddle