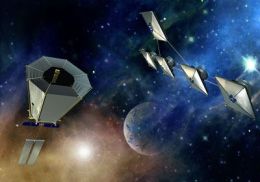 82 G. Eridani is a star about 20 light years away from Earth. It is in the constellation Eridanus

. It is a main sequence star of spectral type G5.

82 G. Eridani (sometimes abbreviated to "82 Eridani") is the 82nd star in Eridanus in the southern-sky catalog Uranometria Argentina. The Argentina catalog, compiled by the 19th-century astronomer Benjamin Gould, is a southern celestial hemisphere analog of the more famous Flamsteed catalog, and uses a similar numbering scheme. 82 G. Eridani, like other stars near the Sun, has held on to its Gould designation, even while other more distant stars have not.

In terms of luminosity, 82 G. Eridani is marginally dimmer than the Sun; about 20% more luminous than Tau Ceti or Alpha Centauri B . The projected equatorial rotation rate (vsini) is a leisurely 0.52 km/s, compared to 2 km/s for the Sun.

82 G. Eridani is a high-velocity star—it is moving quickly compared to the average—and hence is probably a member of Population II, generally older stars whose motions take them well outside the plane of the Milky Way. Like many other Population II stars, 82 G. Eridani is somewhat metal-deficient (though much less deficient than many), and is older than the Sun. It has a relatively high orbital eccentricity of 0.40 about the galaxy, ranging between 4.6 and 10.8 kiloparsecs from the core. The estimated age of this star is close to the age of the universe, so it was probably formed early in the history of the Milky Way.9 A more recent age estimate, based on the star's chromospheric activity, places its age closer to 6 billion years.

This star is located in a region of low-density interstellar matter (ISM), so it is believed to have a large astropause that subtends an angle of 6″ across the sky. Relative to the Sun, this star is moving at a space velocity of 101 km/s, with the bow shock advancing at more than Mach 3 through the ISM.

In his book Habitable Planets for Man, Stephen Dole gave 82 G. Eridani his highest estimate for habitability: 5.7%. Four other stars had this figure: Alpha Centauri B, 70 Ophiuchi A?, Eta Cassiopeiae? A, and Delta Pavonis. 82 G. Eridani (GJ 139) was also picked as a Tier 1 target star for NASA's proposed Space Interferometry Mission (SIM)

mission to search for terrestrial-sized or larger planets.